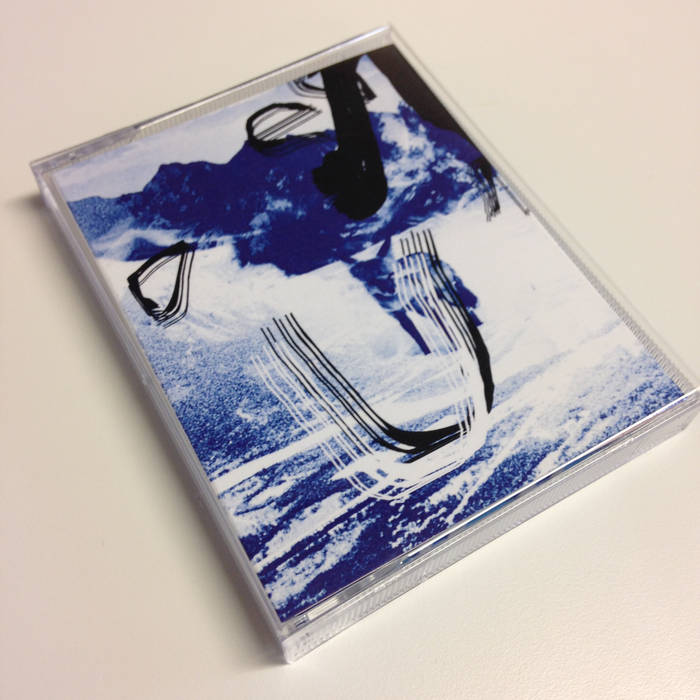 It’s been long on the cards, but I’m proud to welcome the first of the Gnod family to Tombed Visions with Paddy Shine’s new solo project AYN SØF. These hour long recordings show Shine in a more subdued, detailed and arguably more holistic mode of operation, a sphere he is definitely comfortable inhabiting. It may lack the direct, by the throat heft of his other solo project Druss, but there is detectable tantric quality to these recordings which is present in all of Shines music, from Gnod, Druss and beyond. I know Shine’s been getting into more glacial soundscape music, specifically Oophoi whom we both came across on tour earlier this year. With AYN SØF, Shine has chosen to operate in a very specific and precise set of parameters to repurpose the cosmic pulse that is in the heart of all of his work. And that is a brilliant thing to hear; a musician taking the concerns that characterise his voice and finding an entirely new way of expressing them. In actual fact, Paddy’s manipulated and looped vocals are the main sonic source throughout the hour long tape. Split into two half an hour sides, the AYN SØF debut is designed for total immersion. Going through a blow by blow account of what is discovered in these long form pieces would ruin the journey for the listener. What I will say is that it is incredibly deep, dark, slow moving and mysterious. An alien coma imagining primitive people and their esoteric folk music. Huge caverns of rock, lit dimly by ominous voices and flares of artificial light. There are echoes of fractural dub, sufi music and other forms of indigenous ritual song which to me certainly invoke Native American music, especially on Side A where Paddy’s vocals are especially keening and beatific, as if calling to the sky in admiration and wonder. All these elements coexist in a tombed world both ancient and astral. Speaking to Paddy about the album, I know the materials creation has come about in a very intuitive and hands on way. It sounds conjured; a type of automatic song craft. And song is very much at the heart of AYN SØF; these aren’t just academic experiments exploring texture or minimal music making. You can really hear Shine slowly morphing the bank of samples and recordings with a variety of panning techniques and looping to amass an incredible density that swallows you up as well as lulls; all with a purposeful destination. And if you fully submit yourself to this music, you will arrive somewhere pretty spectacular.
- David McLean, November 2015

"Salfordian rapscallion Paddy Shine is the sentient being behind the mesmeric song cycles of AYN SØF, the north-western mover and shaker (Gnod, Dwellings & Druss and Tesla Tapes are some of the key points on his CV) crafting two 30-minute slices of hypnotic drone hymns that mix the primordial vibrations of throat singing with ethereal plainsong chants and tripped out electronic flourishes.

Shine’s moniker here probably derives from the term Ein Sof, which in the Hebrew Kabbalah refers to a kind of religious infinity, God before any physical manifestation, as my esteemed colleagues in Wikepedia put it. Heavy. But I doubt whether this indicates any megalomaniac urge on Shine’s part. Instead, his woozy, amniotic bubbles of sound create a meditative, egoless space, ripe for prolonged astral submersion, with the common elements shared between the two pieces – including bass vocal loops and higher-register chants – emphasising the feeling of a timeless eternal present, a serpentine Ouroboros-like loop or a moment of eternal becoming.

Central to this is Shine’s low, deep vocalisations that echo over the opening sections of both pieces, returning periodically throughout. While his technique bears some resemblance to Mongolian throat singing, the drowsy, liturgical atmosphere he creates brings to mind Jocelyn Pook’s Masked Ball, most famously featured as the soundtrack to pervy occultism in Stanley Kubrick’s Eyes Wide Shut, its disturbing vocal line created by running a section of Orthodox Liturgy, chanted in Romanian, backwards. But, even with those connotations, AYN SØF swerves away from freak-out territory. Instead, it works more as a mantra of acceptance of the darkness in everything as an equal and opposite part of the light. Not so much Sith Lord as the eternal yin and yang circling at the bottom of the universe and resonating through all of creation.

Side A’s Somnes sees several layers of those gauzy, keening exhalations overlapping in blissed-out cycles of repetition, as if the best Gregorian choir in the north west had licked up a chalice and got down to a heavy jam session after hours in the vestry. Shine’s content to let things run and run, and why not, when things are set so beautifully in their right place. Electronic scuffs and a heartfelt extended yodel add some additional touches of ornamentation towards the end, and they’re all good.

If Somnes was a cosmic lullaby, Nihil’s slow burn of a sitar riff is a dawn raga, its circling melodies as lazy as a Sunday morning in the ashram. It’s a groovy contrast to what’s gone before, but it eventually gives way as those voices fade in then out again like waves on the beach, finally giving way to a shining wall of echo and crackling electronics. Despite having moved from the cathedral to the control room, the mood is consistent, even though the sound sources aren’t, the plangent bleeps like a plainsong’s degraded digital copy, playing out for all eternity."
- Paul Margree, We Need No Swords

"Gnod is a Manchester-based band/collective loosely built around psychedelic and manic compositions. Paddy Shine, a core member of this powerhouse, has several other side projects, and his latest outburst comes as AYN SØF. The tape’s two sides are surprisingly quiet and reflective freeform experiments, and it seems to connect his work within Gnod and his solo percussive explorations. Although the Tombed Visions Bandcamp page indicates this bad boy came out in November 2015, it only recently appeared in our inboxes and Bookman’s new cassette releases section."
- Michael Aniser, Electronic Beats

All music recorded by P.Shine at Islington Mill.