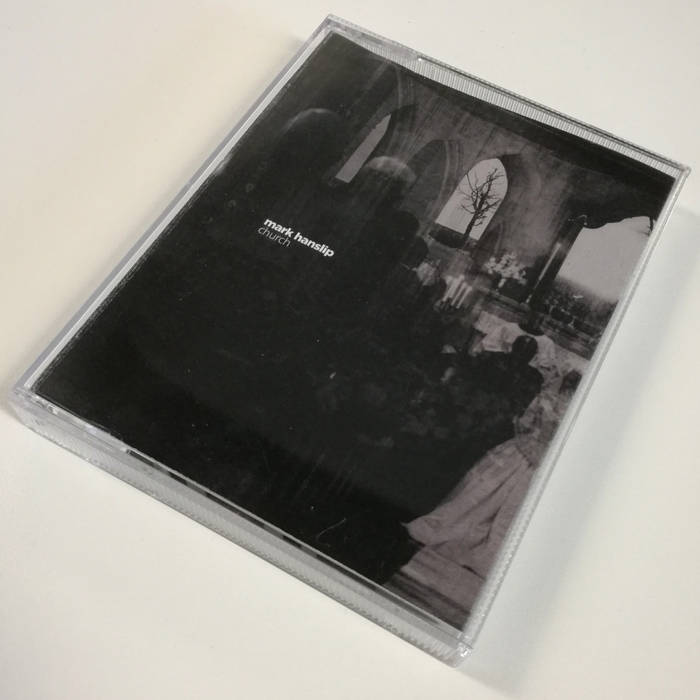 Recorded in Lancaster Baptist Church, Mark Hanslip’s debut on Tombed Visions is new and revisionist strand of bewitching chamber jazz that bristles with a unique kind of supernatural tension. Assembling Stephen Grew on Piano, Alexander Cutteridge on Laptop and Digital processing and on 4 of the 6 cuts, Ed Williams on Guitar, ‘Church’ ethereal ambience is maximised by its recording location, the clarity of each musicians playing fluttering with almost perceptible liturgical reverb. It is why this record work so well. You can distinctly hear each of the players voices, even when flares into its wildest moments. Stephen Grew’s spritely piano work drills into the silence. Ed Williams guitar is almost unrecognisable, using it more akin to a prepared piano, the strings ruminating sharply in the dark. Mark Hanslip’s gorgeous Tenor Sax playing, so rich with soul and melody, warm in its breathy, oaken tones even at its most peculiar. You can hear every breath and lick of the reed in his ghostly, hushed avant-bop style. Cutterdige’s addition to this music is the most unique counterpoint, peppering the sound with electronic snare hits, rumbling bass pads and founds sounds of riverbeds and creaks. Where so many contemporary improvised music records feel cold and academic, ‘Church’ is always resolutely melodic, even at its darkest. These automatic songs twinkle and glisten like mineral crystals in the deep of a strange and wonderful cavern.

"One of the most interesting labels of the moment when it comes to improvised and experimental music is Tombed Visons Records, which is home to English Manchester. The music is usually released on cassette and featured at the label of Shepherds of Cats (including Shepherds of Cats & Günter Heinz ), Jan Daelman, Dirk Serries and Thijs Troch ( Daelman / Serries / Troch ), Colin Webster and Graham Dunning ( Oval ) and René Aquarius, John Dikeman and Dirk Serries ( Night Realms ). In a short space of time, four editions of Tombed Visions will appear at the end of this month.

The first of these is Church of the tenor saxophonist Mark Hanslip, also from Manchester. Since the middle of the previous decade he also played composite music, but since he was in Manchester in 2008, he focused mainly on improvised music. He is part of HTrio, Twelves, The Revival Room and Johnny Hunter's Quartet, and works with drummers Andrew Cheetham and Phillip Marks, bassist Otto Willberg and pianist Stephen Grew.

The latter are also found on Church. Grew focuses on fully improvised music. He plays in the quartet Grutronic, the Grew Trio, the Grew Quartet and the duo Grew and Grew and worked with Evan Parker and Keith Tippett. Hanslip and Grew are assisted by laptop musician Alexander Cutteridge and on four of the six pieces also by guitarist Ed Williams (also: Ed Afraux).

The recordings of this tape release were made in 2015 at the Lancaster Baptist Church; No common location for the kind of music that belongs to this album. The trio / quartet plays free improvisation music that does not easily turn away in an angle. The music is quirky and barbaric, but also sounds remarkably melodic and warm. Also, the introduction of electronic sounds from Cutteridge does not change it; He always knows how to produce the right sounds, which do not necessarily sound warmblood but perfectly match the temperament of Hanslip and Grew, especially the Hanslip warm tone.

Grew shows himself a very busy pianist; Especially in the short opener 'I' rains the nuts. Hanslip plays barely tones and Cutteridge and Williams put that noisy game over there. As far as the opener sounds, it does not matter anymore, but the music - despite the absence of a percussionist - knows a lot of movement. 'II' is a lot darker than the opening track, more exciting also by the alienating sounds that Cutteridge turns out of his laptop and Williams's opposing, scratching guitar game.

The suspense becomes even more tangible on 'III', especially in the first part where Grew searches for the low registry and Cutteridge sees threatening sounds. Hanslip plays with air and gentle long tones, later on on vibrating figures. It's Grew who takes care of melodic lines. The dark, ominous atmosphere continues to be maintained, even when all the musicians loose a chaotic part at the same time. Hanslip has taken over Leadership Leadership, and Williams is making more money.

Darkness does not end, because IV also breathes dark spheres, although it sounds more resounding than in 'II' and 'III'. The pace is low and there is even a silence, which contributes to the retarded voltage that emits the piece. The game of Grew is minimal. Hanslip blows air, soundly audible, making it look like listening to you. The apparent rest can of course not last and after three minutes, piano and guitar are the first to break the tension with fast play. The tenor ax plays fragmentary short phrases.

Hanslip plays the game with air on 'V', but is now drying. Grew backs the nuts and Cutteridge contrasts with that by producing sounds that sound like the musicians are in a deserted swamp. However, the atmosphere strikes as soon as Hanslip and Grew improvise and Cutteridge brings noisier sounds from his laptop. The transition to a quieter part is grand. That rest is also relative here; The musicians' game is too whimsical to radiate any serenity. It does not take long for restful places to be searched.

Also in the closing 'VI' is played with suspense, with Cutteridge now choosing futuristic sounds. He is the one who forms the basis in this piece, where Grew did that with notes in earlier tracks. Hanslip sounds like he has chosen a position in the big room. Grew touches the low piano keys, but after almost four minutes, it also produces a few fast picks, which will sound the robust second part of 'VI'. Hanslip and Grew play hunted with a lot of nuts, and Cutteridge makes percussive sounds.

The acoustics of the church will help to make the music clear, so that every single sound is heard in the hectic moments. Church is not an everyday free improvisation record. The contrast between abstract play and melody and between irrational and warm-blooded sounds creates tension. The improvisation happens together. There is no solospots, the interplay is what matters. All of these features provide a beautiful, listening free improvisation plate."
- Opduvel