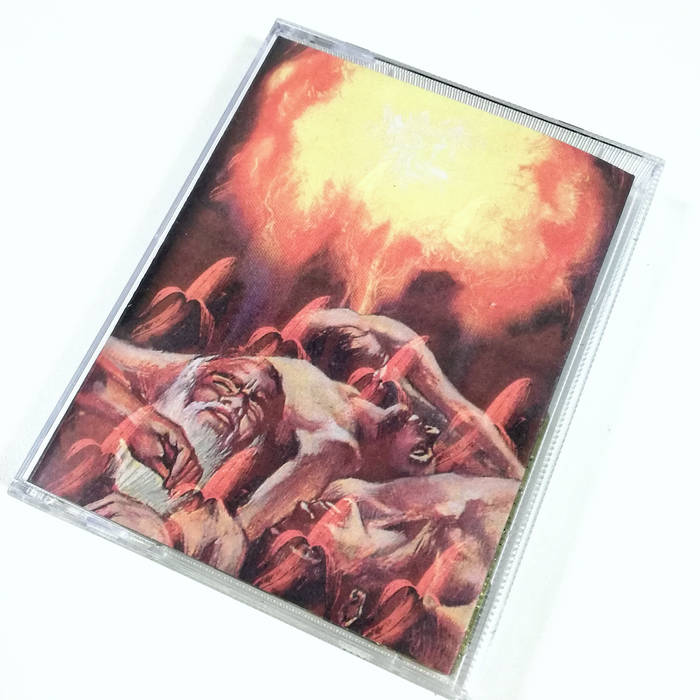 On a sweaty April night last year, three musicians played together for the first time in the red glared bowels of Islington Mill and released the very definition of fire music. Armed with Alto and Baritone Saxophones and a Bass Clarinet, Alan Wilkinson’s huge and fervent playing found the perfect foil in the long associated Andrew Cheetham and David Birchall. This live album shows some of the latter’s most rockist playing, certainly for this label, hammering their instruments against the great tsunami of Wilkinson’s horns. Perhaps it was the AC/DC pounding through the PA before they took to the stage, but after taking mere seconds to suss each other out, the trio burst into a nod-inducing kind of free rock, Wilkinson spraying altissimo over Birchall’s huge chordal riffage and Cheetham’s deranged take on a decimating back beat. Establishing an intensity like this so early on charged the entire set with a threatening presence, particularly pronounced during the quieter interludes, simmering like a cornered jackal waiting to strike. Birchall has never sounded better, his playing hugely bluesy and distorted. There is an incredible section early on where David blurringly strikes out rapid fire harmonics that sound like gamelan on speed. Cheetham swings hard throughout, firing all cylinders where even his gaps of playing feel pregnant with electrifying potential. As for Wilkinson, there’s not much more I can say other than he is one of my favourite saxophone players, that this record is proof of that. He is a shining example of a player so connected to the raw and primal cry of the blues that he can literally move you, inside and out. The three of them can strafe seamlessly into opposing areas of sound, from soloist spots of extended technique, cluttered and truncated balladry and soul alighting, pugilist fire music. As raucous as the music gets, there's a realisation that this is not simple aggression that’s on display but an infectious passion. A passion born of excitement in interplay, a celebratory and spiritual affirmation of deeply interconnected playing. By the end, there was sweat dripping from the walls. Witnessing this unfolding led some of the audience members to rightly exclaim ‘Fuck!’, simply astonished by what we were watching. You’ll hear this on the tape and it’s probably my voice. It’s an old adage, but you had to be there….and now you can be.

"“Live at Islington Mill” is the newest release of “Tombed Vision Records”. The music was recorded by three jazz masters – David Birchall (electric guitar), Andrew Cheetham (drums) and Alan Wilkinson (bass clarinet, alto and baritone saxophones). Music by these musicians is based on fusion of avant-garde jazz and rock styles. Even though, the basics of the compositions usually are formed from the basements of avant-garde jazz, free improvisation and modern jazz. These elements have an influence of various orck styles, vibrant and deep solos, energetic and turbulent riffs and other similar things. The influence of rock music strongly hears at David Birchall electric guitar improvisations. His music is based on hard and strong rhythmic, monotonic and repetitive rhythmic forms, deep, harsh and vibrant riffs and other rock music elements. which are gently fused together with free improvisation and spontaneous musical decisions. Andrew Cheetham and Alan Wilkinson music is totally based on free jazz, experimental jazz, turbulent and expressive improvisations and musical experiments. Collective improvisations by these outstanding and original three jazz masters are filed with passionate, turbulent, energetic and remarkable sound.

“Ligve at Islington Mill” is based on organic and interesting synthesis of various jazz, rock and avant rock styles. The music is based on free jazz – spontaneous solos, inventive musical decisions, colorful and innovative instrumentation, huge range of extended playing techniques, expressions, dynamics and sounds are the most important elements of the musical pattern. Each musician is improvising colorfully and individually – they create independent and bright melodies, which make a strong contrast with each other. That’s how the polyphonic musical pattern is created. Music has especially bright, fresh and innovative musical pattern, which is based on contrasts, different moods and characters. Open and free form, turbulent and energetic sound, fascinating musical experiments, huge range of strange and unusual timbres – all these elements also make an effort for whole sound of the compositions. The music is constructed by many small pieces – each of them has its own character and sound. That creates dynamic and moving sound – music is changing all the time, it turns out to new forms, sounds and expressions. Musicians are showing their own and original playing style, expressive and interesting playing manner and making innovative and modern musical decisions. Guitar improvisations by David Birchall are based on main typical elements, which form his playing style. Expressive, passionate, turbulent and vivacious free improvisations have dynamic, moving and remarkable sound. Musician fuses together free improvisations, basics of avant-garde and free jazz, mild intonations of various modern jazz styles with some main elements of rock. Hard and monotonoud rhythms, deep and harsh riffs, vibrant and energetic sound – all these elements create a strong relation with rock music and gently fit together with avant-garde jazz. Musician is using inventive musical decisions and experimenting in all fields of musical language. Alan Wilkinson saxophones and bass clarinet improvisations make a strong contrast with guitar improvisations. His music is formed by the main elements of avant-garde and free jazz. Fascinating musical experiments, searches of strange and original timbres, new and colorful musical decisions, eclectic stylistic combinations create gorgeous and effective sound. Alto and baritone saxophones melodies are especially bright and vibrant. It marvelously fits together with electric guitar and drums. Expressive, passionate and vivacious solos are filled with harsh and shrieky sounds, unusual timbres, turbulent and dramatic culminations and powerful, intense, vibrant and loud blow outs. All these elements create effective and interesting sound. Drums section is leaded by Andrew Cheetham. It’s also very energetic and bright. Drummer improvises expressively and with passion. He makes inventive musical decisions, experiments in instrumentation section and searches for new and strange timbres. His free improvisations are like real bursts of energy – wild fast, roaring and extremely loud drum rolls, turbulent and moving solos, huge range of colorful timbres are fused together in one place. The music of this album has remarkable, moving and expressive sound."
- Avant Scena

"This all-out jazz-noise summit is heavier than a gridlocked city. Back in 2017, veteran reeds geezer Alan Wikinson pitched up in Salford for a take-no-prisoners session with northern stalwarts Cheetham and Birchall. The results have proved essential for those whose tastes run to the untrammelled and fiery.

Salford’s Islington Mill is a fitting venue for such sonic misbehaviour, being an epicentre for Manchester’s free music underground. Drone rock gurus GNOD have a base here and many more out-there players orbit it like planetoids circling a dark sun. So it’s fitting that this recording is a heaving, bleating bastard of a set, its warty machinations twisting the trio’s stubborn fury into a righteous and ecstatic yodel.

Wilkinson, canny blighter that he is, comes prepared with alto, baritone and bass clarinet. Strained yowls alternate with low-end burps, with some soaring, soulful blues a surprise move late on. Generally, though, Birchall and Cheetham are equal to the task, the former chopping out fat bass-string licks then spraying webs of gluey matter like everyone’s friendly neighbourhood improvisor, while the latter’s neat-limbed dexterity effortlessly parlays humungous cacophony into sleek, brutal ferocity."
- Paul Margree, We Need No Swords