by I Have Eaten The City 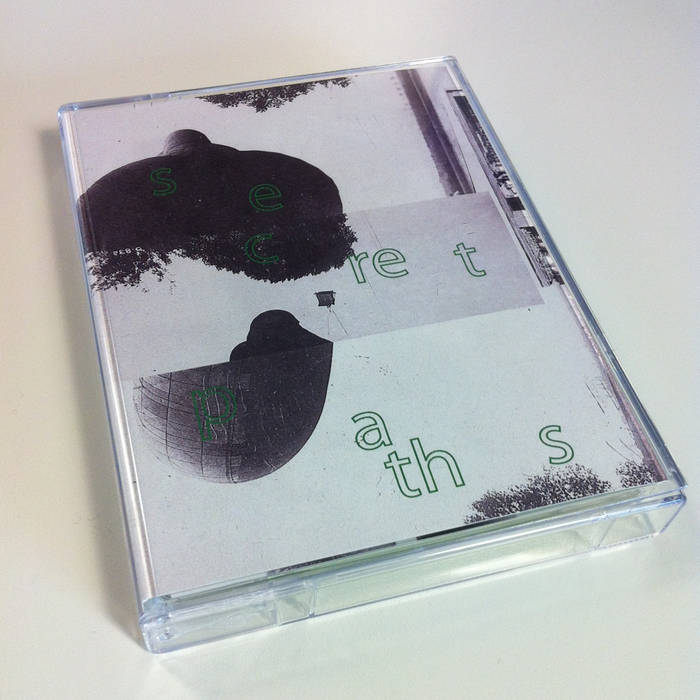 Their first recorded album since 2007, ‘Secret Paths’ is I Have Eaten The City’s tour-de-force. This trio of multi-instrumentalists could easily be seen as a microcosm for the practices of Toronto’s wider experimental music scene, the breadth and fluidity of their experimentations throughout their discography showcasing an alarmingly diverse range influences and atmospheres, of which ‘Secret Paths’ is a clear apex. The astonishing opener ‘Eyot’ unfurls in wide-eyed panoramic colour, showcasing a radiant display of aquatic guitar textures, gorgeous flute work and pulsating drum machine clusters all suffused with electro-tropical humidity that bathes the listener warmth before boiling to its ominous close. Album centrepiece ‘Mannequin Gait’ careens like a slow late night drive through a sprawling metropolis, the pulsing groove the only thing keeping the flowering, neon melodies from collapsing in on themselves. It’s here that saxophonist Colin Fisher really shines; his keening melodies taking flight around Nick Storring’s deeply plucked cello groove and Brandon Valdivia's throbbing and dexterous take on dub. Perhaps less obviously impressive than the telepathic interplay shown on these long-form journeys is subtlety and introspection of the trio on both ‘Ipê’ and closer ‘Mollusc’. The former's ensemble of balafon, thumb piano and cello is both suggestive of various African and South East Asian idioms, yet skirts appropriation. Meanwhile, the latter evinces the trio's interest in soft, spacious modern composition, with each player inhaling and exhaling a considered and haunted melody that feeds a continually blossoming whole.

Easily the finest release on Tombed Visions so far, ‘Secret Paths’ takes a kaleidoscope of influences and reconfigures them on each of the five tracks that make up the record. It's a strong statement from a criminally underrated band at the heights of their powers—all the more dumbfounding once you realise that all this music was improvised.

"Another intriguing cassette from Manchester's Tombed Visions Records, this time featuring mercurial, psychedelic improv from Toronto based multi instrument trio, I Have Eaten The City. The fact that each of the members of this trio plays upwards of five instruments each gives some indication of the sheer range of styles touch upon, ingested or regurgitated across the duration of this tape. We go from proggy sounding wah-guitar n’ flutes, sounding a bit like Gong at their most wigged out, to fractured drum machines and cascading delays, West African xylophones and cello, late-night dubby saxophone led jazz and abstract sound poetry.
The impressive level of musicianship and the relentless genre hopping brings to mind some of John Zorn’s projects, especially Naked City, but with a much looser, more organic sense of development. There are recurrent influences of jazz (especially the saxophone) and dub (the liberal use of delay, some of the rhythms) that form part of a core sound pallette, but beyond that you never really know what’s coming next.
It’s an exhilarating listen for the most part that sometimes takes you to unexpected places when the group mix it up wildly, like the end of opener ‘Eyot’ where grinding atonal guitar, jittering electronics and joujouka-like flutes conjure an alternately celebratory and dystopian vision of a cultural melting-pot."

"On this tape released in June, this Toronto trio of psychedelic improvisers showcase their incredible ability to assemble compellingly odd soundscapes from very non-standard instrumentation. The instrument list includes West African balafon, harmonica, cello, drum machines, saxophone and the music is equally as frontierless. The 17-minute 'Eyot' incorporates twisted sound effects and warped spacey guitar ramblings alongside trudging drum machine rhythms and fluttering flutes, while the chiming thumb pianos, balafon and cello on 'Ipê' converse amid billowing notes and ultimately reach cyclical melodies as captivating as any of American composer Lou Harrison's experiments to mesh Western classical tropes with Javanese gamelan. The structures become so fully intact so quickly, it's almost impossible to believe the music's all made up on the spot. I Have Eaten The City are simply astonishingly good at what they do, and they blend unexpected instrument combinations with unwavering, acultural conviction. Anybody with even a passing interest in improvised music should get this tape immediately, and hopefully somebody can get these guys on a plane to the UK as quickly too - sounds like one hell of a performance."

Composed Collectively by I Have Eaten The City — Storring/ Fisher/ Valdivia