by Shepherds of Cats & David McLean 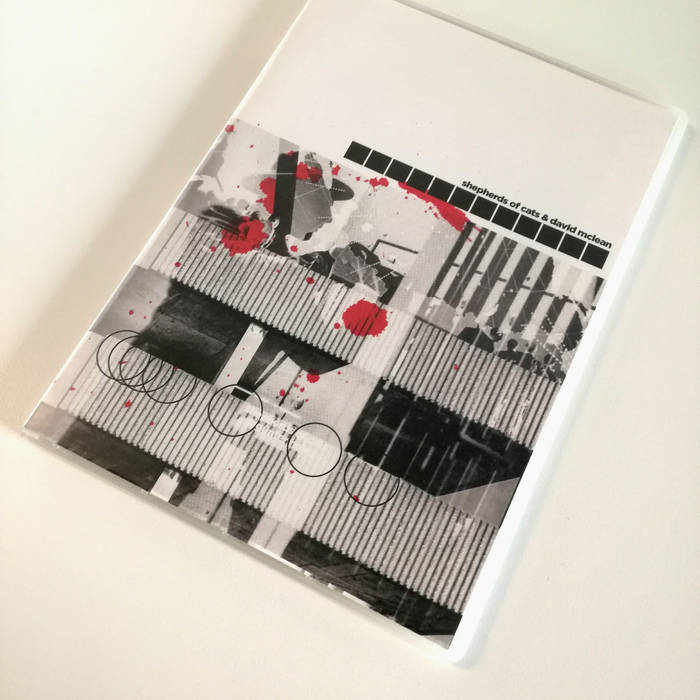 A monumental, truly psychedelic double album featuring over 2 hours of music, Shepherds of Cats collaboration with Tombed Visions label head David McLean is as expansive sonically as it is in length. Sounding at times like a downright weird, automatic film score for a lost Blade Runner sequel, maybe, this ethno-futuristic music is culled from studio sessions and live recordings, murmuring the likes of Miles Davis’ Electric Period, Supersilent, Popul Vuh and a host of other strange, uncategorizable music that could only come from these musicians warped imaginations.

"The Polish English Shepherds or Cats will not grow any grass. Just four months after the appearance of Shepherds or Cats & Günter Heinz , the company again shows a cd-r the light. Even now, the quartet (quintet when you meet VJ Maciek Piatek) is assisted by a guest musician. David McLean, saxophonist and label boss of Tombed Visions Records, the label that appeared next to Shepherds of Cats & Günter Heinz, also Shepherds of Cats with special appearance or Dariusz Blaszczak and Panelak .

As mentioned before, Shepherds or Cats does not play musical conventions. The music of the band falls under the name of free improvisation, but in the instruments, the musical approach and even the titles of the pieces, the company differs from what you would expect as a listener. In its own opinion, the group investigates the external edges of good taste and the limits of what is considered acceptable are shifted.

That was certainly the case with Shepherds of Cats & Günter Heinz , where in a little fifty fifty a fantasy story was told, both musically and vocally. The album requires the listener's perseverance, but patience is rewarded more often. On Shepherds of Cats & David McLean , the patience of the listener is re-tested. That's not because this album is inaccessible to the predecessor, because that's not the case. No, this time you have to be prepared for long-term concentration, because this album, which appears on two CD-Rs, consists of three pieces of 46, 21 and 69 minutes, respectively.

The music at Shepherds or Cats & David McLean is made up of live recordings and studio sessions. However, each piece sounds like one long improvisation, in addition to jazz and free improvisation, krautrock and psychedelics seem to be inspirational sources, as well as ethnic music, both from India and Africa. The latter aspect is reflected in the percussion of Aleksander Olszewski, which appears regularly, as soon as possible in opener 'nnnnnyyyyyaaarrrrgggnnnnneeeiiiiiarrrnnnnnnaaaaaayyyyyyyyyooooowwwwwwnnnnn coda hhhhooohhaaaaa-hhhhiiiiiiyyyyyy'. Striking features in the beginning of that piece are further Adam Webster's dissonant cellular game and Dariusz Blaszczak's orchestral sounding synths. McLean plays not only saxophone, but also small flutes and synths. There is plenty of room for a narrative voice, which sometimes makes the work audible. Its musical framing is exciting. Only after eighteen minutes, McLean puts his saxophone in order to serve and even shout the screaming narrator. McLean solves a couple of times, accompanied by percussion, voices and electronics, the other time by Jan Fanfare's rattling and rubbing guitar. The voice of voice returns, quieter now. Shepherds of Cats and David McLean tell the musical story linearly, no repetition is possible. There is also no connecting link, but it does not detract from chaos. The music gives the listener little grip, but remains buoyant, precisely because of the unpredictability.

'Slow Dance At The Martian Wedding' is the second piece on the record and in the opening there is actually a slow dance, although Fanfare with his guitar is equally best to disrupt the case. Melodies are played by McLean on sax and Webster (pizzicato) on cello. Slow percussion serves as accompaniment. It can of course not last forever; The matching components are skillfully spaced apart. There is no more rhythm, the synths dominate and produce a slow melody and alienating futuristic sounds. The cello goes its own way, already striking a way out. McLean's saxophone feels senang in the company and solves about an ongoing rhythm, initially with a warm tone, but later also robust and contradictory. The shortest piece on the plate is completely instrumental and it is easy for the listener to collapse.

'To make this release extra special and completely unique please insert your title here: ______________ (the shepherds of cats take no responsibility if you choose the same title as somebody else' reads the full title of the last piece on the plate. The first two pieces of linear musical logic are missing here. The work seems to be composed of different segments that interfere in one way or another, reinforce or even contrast. Again, no word or find is repeated, so that there is no There is a huge amount of musical finds, dynamics, passion, beauty, dissonance, interplay, disorder, noise, emotion, tension, distress and excitement. The voice of voice is back and the music is Constantly in motion. At the more disturbed moments, a movement is forward, sometimes more palpable than audible. Sounds shift or appear suddenly in color. It's all taking time, one hour and nine minutes long. It's sixty-nine fascinating minutes.

With more than two hours of music, Shepherds of Cats & David McLean is in a long time, but it is of course not compulsory to take the three pieces together. Each piece has its own specific features and can be listened separately. Shepherds of Cats tells this album that it is a unique companion that takes its place in improvised music. None of the musicians is busy playing the lead, the joint music is the means and the goal. Guest musician McLean fits seamlessly in its entirety. The music is unpredictable, so even after several turns, the album still offers surprises. The wealth of ideas has no limits. Quantity and quality go together with Shepherds of Cats and David McLean on this beautiful album."
- Opduvel

"The Manchester Tombed Visions Cassette continues to deliver new and intriguing music. Here we return to the English-Polish artistic troupe Shepherds Of Cats. Their previous record, featuring guest trombone Gunter Heinz, was discussed at one of the previous collections. Today we get a long set of sounds (2 CD-r), recorded in concert in Wroclaw, where the group was an English saxophonist David McLean, by the way the head of the publishing house.

Music Shepherds is multidimensional, multigatunkowa and far eclectic as rich in events as developed is used by musicians instruments (Adam Webster - cello, voice, Jan Fanfare - electric guitar, voice, loops , Aleksander Olszewski - percussion, voice, horns , Dariusz Blaszczak - synthesizer, loops , David McLean - tenor saxophone, synthesizer, other stylists and Maciek Friday - videoprocessing). Every sound is right here, every artistic idea is acceptable. Compared to the predecessor, SOC + McLean seems to be more dynamic, indeed in many post-rock moments (frequent use of very rhythmic percussion), with a large portion of somewhat crazy (positive) improvisation on any subject, and also, what is the principle here , a significant contribution of melodeklam. It brings a lot of fun to McLean, who is able to dynamically move the band with the sharp and sharp passages of his fiery saxophone.

If this recording has some disadvantage, it is its length. Shortening the board by at least half (lasting nearly 140 minutes) would greatly increase its value."
- Spontaneous Music Tribune

All music was recorded during an improvised session and a fully improvised concert that took place in creative arts center www.opt-art.net in Wroclaw, Poland.