by Shepherds of Cats & Günter Heinz 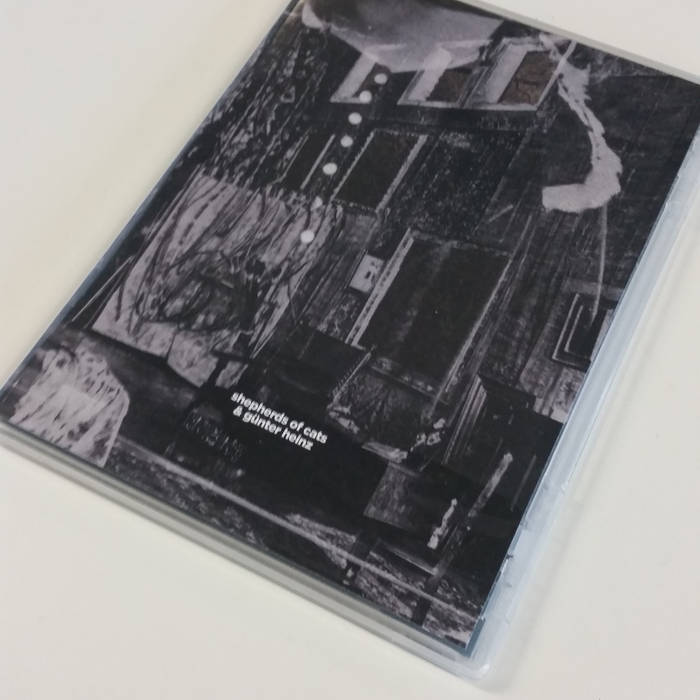 Only a group as downright weird as Shepherds of Cats would be able to absorb a legendary free improvising trombonist directly into their sound. Over the course of an hour, the group, hunters of sound, unearth ethno futurist visions, chambered folk, raucous free jazz and passages of downright absurdity that in one instance contains a coughing fit. There is no group like them in Europe or the rest of the planet that use improvisation in such a bewitching fashion.

"Shepherds of Cats is a Polish-English group that has little to with musical conventions. There is almost nothing ordinary about this band, at least not when it comes to the instruments and the music. The roots lie in free improvised music, but the way the quartet that gives meaning to is self-contained. The group, founded in 2014 examines claims to be the outer edges of good taste and pushes the boundaries of what is considered acceptable.

Collaborations with other musicians and artists from other disciplines are not evaded by Shepherds of Cats. For example, the tire occurs with VJ Pietrushka (Maciek Piatek), and releases are published by Ayako Ogawa and Panelak. On the English label Tombed Visions is the CD-R Shepherds of Cats & Günter Heinz appeared. Günter Heinz is a German trombonist who has already earned more than made his mark in the improvised music is also influenced by eg John Cage and Christian Wolff.

Besides trombone Heinz plays on the album and whistles' knack-Frösche (toy frogs that make a clacking sound). Furthermore, it is, inter alia, use is made of trays, loops, cello, dohola, cymbals, Hira Daiko, a broken guitar tuner, clavinet and vocals. The instruments could indicate that as a listener choose a strong rhythmic piece you get, but as I said: Shepherds of Cats does not musical conventions. But what we hear anyway?

Shepherds of Cats and Günter Heinz tell a story. An invented on the spot, imaginative and absurd story that is not told linearly, side tracks and walks out of control. It starts fairly straightforward, with a rhythmic playing cello, percussion accents and laying a freely moving trombone, but gradually the music increasingly disrupted and diving all kinds of sounds. That goes sometimes so far that remains only disruption. However, the music is not adrift; the musicians know what they are doing and every little sound contributes to the big picture, the story is told.

A prominent role for vocals, though there is not much singing. There are stories, strange stories, but also less appetizing statements the company does not go out of the way. Cough and hiccups are part of the music "after an intervention," with almost eighteen minutes the longest track on the disc. A sick man speaking to us in English, and he speaks the sentence "I am cured of occasions. Credible is it not, before the voice sounds too anxious and worrying. The text is introduced by a seemingly confused person, while text and speech have a poetic power. The musical accompaniment is not intrusive but not obliging, before the music is too stubborn character.

Despite Shepherds of Cats & Günter Heinz is divided into titles that can be read sequentially as a piece of text are, in fact there is a long improvisation. Musical excesses album does not contain; Each musician plays mastered his game, which instrument or object is too bad. Melodies are there, especially when Heinz told his trombone swaps for flute in 'we went to a very nice garden, very nice "and also bowls, cello and other instruments are used melodic. Even when all the musicians are heard simultaneously, they keep calm and the music exudes a certain calm.

That peace is tense calm in 'and I started not even think about it', which reappears narration. It's not much better with the protagonist; the voice weak and plaintive, and even when he is singing sounds depressed. But suddenly puts anger and pointing arrows on a third, that record of getting along. A steady beat follows, but not for long. You hear night sounds ominous, and there is fear, pain, suffering.

The threatening atmosphere fades away again, but it is not a peaceful rest that sounds now, there is insanity, though the protagonist is exhausted and looking with a confused look around. "Slowly I walked through the bubblegum interior and emerged into a corridor How many followers bore no relation to what I expected," read the titles of the last two parts in succession.

This puts an end to a fantastic musical story, a story which is captured in words but especially in sound. Shepherds of Cats & Günter Heinz know their quest for sounds so dress in that a coherent narrative, how disturbed sometimes is. Therefore it is necessary that the listener are willing to soak without expectations in the foreign sound world that the five musicians offer you. Who succeeds, wait an adventure that stimulates the imagination and musical ideas messes."
- Opduvel

"In front of us the theater is hellish! A multi-ethnic musical hybrid, equipped with a great deal of literature, declaiming and screaming, as well as extremely free-sounding improvisations.

Here is a unique sound and lyrics show, with a large portion of expressive acting! Creative, musical chaos in which the artistic means of expression is mainly ... recognition of the struggle. A group of sound minded madmen plus a German trombonist, with considerable experience, also in the field of contemporary music. Passion, hysteria, determination, and fun. The form, sophisticated instruments, a description of the dramatic situation (even a lot of literature in the titles of individual parts). This paroxysmal music incident reminds me of the improvisational drumming of Terry Day's People Band, an English percussionist who functioned artistically at the turn of the sixties and sixties.

A guitar that may not at all be a guitar, cello, bells, instrumental toys, voices, trombone. A great machine that produces sounds that grotesque, so-so-absurd, tale that seems to have no beginning or end. Next to loud, even free jazz microescalation, quite a lot in this trance music, meditation (especially trombone!) And text flowing from throat to throat, like vodka too warm. From minute to minute we get closer to calm, rather nice sounds. Contemplation, specific chanting. Also cheeky and unceremonious reign of literature and melodrama. At the end of a pinch of electro-acoustics and musical impro-embarrassingly complicates the whole picture. Artistic, counter-cultural melting pot, from which occasionally emerging exciting moments of intense excitement, both sides of the scene. As a 55-minute spectacle, it's only a recommendation of the middle (yellow), but it does not stop intriguing (these feminine voices off the pitch, in Polish ... I felt like David Lynch's Inland Empire premiere). It is definitely worth going back to this event."
- Spontaneous Music Tribune