The Garden of Unknowing 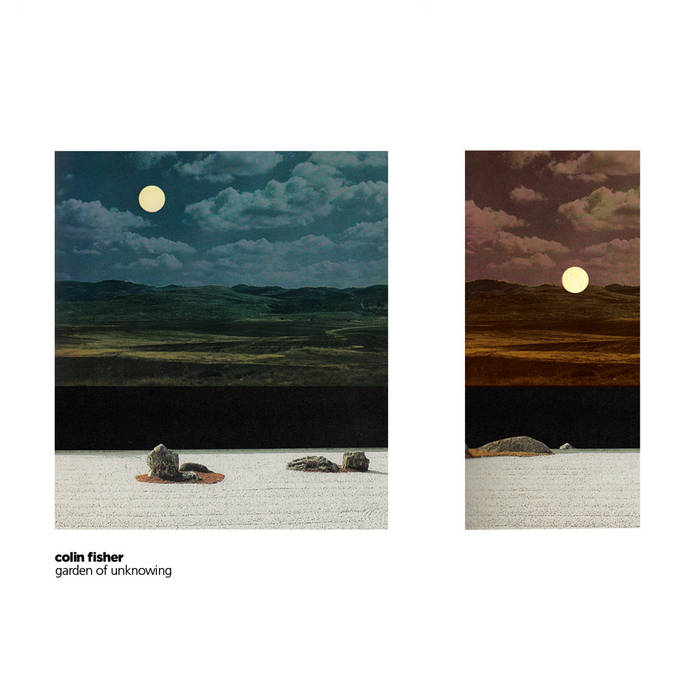 ‘Garden of Unknowing’ is a work of staggering ingenuity from one of Toronto’s most talented and in demand multi-instrumentalists. Utterly on his own, Colin Fisher masterfully employs guitar, saxophone, synthesizer, drums and bass to create a shifting suite of nocturnal jazz. These are ghosts of song, which, going by the simple clear titles, emphatically question the very nature of existence. Fisher’s breath-taking technical ability to conjure whole sound worlds entirely on his own is obvious. But, far from an extended display of virtuosity, there is always a deep emotional core to his improvisations. It is a music characterised by a keening and searching inquisition of melody, reaching and grasping at song form, yet allowing the compositions to fall through his fingers. This is none more apparent on album centre piece ‘Eternity’, Fisher latticing dark chordal shapes over skittering , muscular drums which ushers his soul alighting tenor saxophone into the higher reaches of redemptive ecstasy before disintegrating into silence. This is music bursting under the weight of its own beauty.

"I’ve been following the music of Toronto-based multi-instrumentalist Colin Fisher for over ten years, including his output with the I Have Eaten the City trio alongside Nick Storring and Brandon Valdivia (Mas Aya) and with Not the Wind Not the Flag (a duo with Valdivia). It goes without saying that when new Fisher tunes arrive on the scene, that I’m going to do my best to sniff them out. UK-based Tombed Visions is a new label to me, but upon peeking at their back catalogue I realize that I’ve been hiding under a rock. The aesthetics of the imprint’s releases are fantastic – each is a miniature work of art. I have some investigating to do…

Fisher’s oeuvre is massive and boundary-stretching, as far as creative music is concerned. Whether he’s going solo or teaming up with like-minded heads, there are no laurels rested upon. Yet there’s a cohesive thread running through it all, a signature that is undeniably present in each release. Perhaps epitomizing this phenomenon, The Garden of Unknowing finds the musician pushing compositional and improvisational boundaries yet again. Fisher wields guitar, saxophone, synth, drums and bass all on his own to weave together a series of free jazz pieces that contain the energy of a complete outfit – a collection of masterful players folded into a single entity.

Musically, these pieces are incredibly melodic and appealing. Each of the seven tracks is a mini-universe, complete with interwoven narratives – both though-provoking dialectics and late-night carousals. Each element unfolds expertly as Fisher improvises with himself, the music ebbing and flowing with an inconceivable unison that only a master craftsman of sound could achieve. Particularly engaging is “Unveiling,” which unfolds with an energetic abandon over a searing wail of synthesizer. Its ember sheds tongues of flame that twist and leap freely, cascading upward as bursts of orange sparks, until finally waning at track’s end."
- Nine Chanis To The Moon

"The miraculous solo album by Toronto multi-instrumentalist Colin Fisher has a distinctly autumnal mood, drifting along through imagined deciduous woodland, communing non-verbally and instinctively with overloaded senses. It’s a visceral experience soaking up this record, and it’s all down to Fisher’s utterly innate sense of musicality. The Garden Of Unknowing is a collection of seven dark jazz pieces, with Fisher on guitar, drums, synth, bass, and tenor sax, overdubbing everything to create a thick web of interlocked Fishers. The music appears to have been entirely improvised too, which is all the more miraculous.

Fisher’s guitar (his lead instrument as far as I understand) is the album’s core voice, gifting luscious clean chords and fractured licks in abundance while Fisher replies to himself with impulsive scattergun drum blasts, skirting rhythms. Fisher also adds synth and sax to some tracks, the former adding some Acid Mothers Temple style cosmic flashes (criminally hitherto missing from jazz, might I add), and the latter comprising the sanest voice on the record carving solid melodies into the madness. There’s little that sounds quite like the clatter Fisher’s issued here – perhaps a few snippets of Bill Frisell at his weirdest, or Keiji Haino’s Fushitsusha at their very jazziest – but despite its sheer alien qualities, Fisher’s musical syntax is at its core familiar. The pieces scurry and ramble into all sorts of corners, and it’s impossible to imagine which tracks Fisher started with before layering and layering further instrumentation on top. It’s the modern jazz equivalent of a Norman Bluhm or Pollock painting, balancing impulsiveness with emotional precision. The way this one cycles through my walkman – musically impossible to follow yet constantly tugging me along until the unexpected tape flip arrives – is a singular feeling in the history of the weary little machine. Sad beyond sad; joyous beyond joyous."
- Tristan Bath, The Quietus

"After a long walk up and down a grubby seafront I returned home and I spent 38 minutes listening to some of the most thoughtful jazz I have heard for a long time. Manifest with vigorous nods to the kings and queens of the 70’s spiritual jazz movement, frenetic drums that one fails to see how they are holding a piece together, yet doing so, so perfectly. Spring reverb steeped bass line, and modal sax that warms the heart (mine anyway, fans of ii, V, iV take care). Identifiably modern in it embrace of warbling synth and free improvisation. Think “The Necks”, meeting the Washington dynasty, with a healthy dose of not worrying whether they sell that many records.

A highlight for me is that meandering track “knowingness”, maybe one of the most restrained pieces from the album, but made so special, to me, by the guitar playing of Colin, almost a jazz standard, but imbrued with a teenage ear full of Washington hardcore.

A majestic release from tombed visions, one that should have sold out a while ago. "
- OSC Label