Troubles? I Got A Bartender 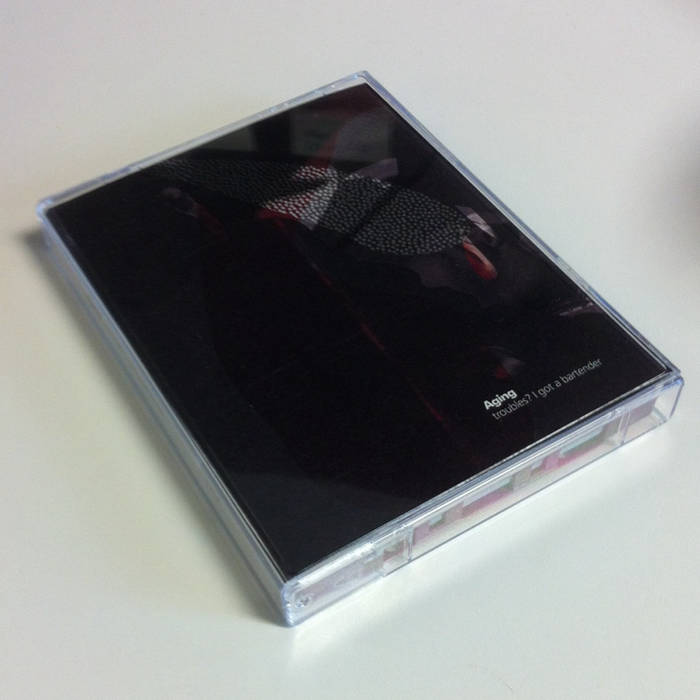 Christopher Moklebust Aging's Troubles? I Got A Bartender plays like a melancholic journey into inebriation. It is slow and monotonous - which help to achieve its hypnotic affect. Favorite track: A Slow Submersion.

David McLean’s Aging project returns to the label with a suite of noirish balladry and bar room dirges, painting a murky, multi-instrumental portrait of man under the influence. Although the main focus of these recordings is largely McLean’s guitar, the spaciousness and atmosphere that characterised his solo piano debut ‘I Swear I Saw Her Halo’ is still very much intact. Pairing with drummer Andrew Cheetham for three of the five cuts, McLean’s sunken and dungeoned melodies act as a perfect foil for this extraordinary percussionists thoughtful dexterity and propulsive weight. Culled from several improvised encounters, McLean utilises an array of melancholic loops, volumes swells and hushed guitar licks, channeling Loren Connors and Mark Nelson to provide a canvas for Cheetham’s simmering percussion work; both dueling to create three very distinct mood pieces that narrate back alley menace, opiate calm and slow burning melancholy. For the remaining ‘songs’, McLean decamped into his own home studio to craft two experimental pieces aiming for the same woozy looseness of the original jams. ‘Vampire Body Blues’ is a tar black examination of sun starved guitar dissonance blushed by mournful brass and woodwind, erupting into a redemptive Morricone-esque finale. The aptly titled closer, ‘Keening & Crying’, pours wailing saxophones into the listeners ears as a drunken beat makes its way through a fog of organ and Fender Rhodes. A late night vigil for the demon drink and intended for nocturnal consumption, a fact mirrored by in house designer Lewis McLean’s pitch black, pulp inspired artwork.

"Lets talk about Tombed Visions for a second. The releases on this rad UK label have been flying under all the radars we’re aware of..but we’re going to change that. Not 100% on exactly when this tape from Aging was actually released, but what matters is that it seems to be available and this is were you, the readers, enter the fray. “Troubles? I Got A Bartender” is a late night free jazz record, but with a slower pacing than you might come to expect from the genre. Jangly guitars, melancholic horns, grave Rhodes runs and possessed drumming swirl around like the smoke from ashtrays in a lonely bar somewhere underneath an overpass."
- OMGVinyl

"In keeping with the Manchester label's recent run of genius tape releases, Aging presents us with a set of ghostly freeform instrumentals, self-contained in a gothic late-night chamber. Looped gently plucked guitar chords are centre stage, punctuated by sparse free drumming, and the occasional interjection of additional distant voices, saxophones and rumbling washes of bass tones. The (presumably improvised) interactions between the instruments take on a ritualistic edge, almost chanting together at times, and conversing at length - on the brilliantly scary aura of 'Vampire Body Blues', the lilting sax gets suddenly sidelined by an aggressive turn in the guitar, and the sax ultimate responds by blasting abrasively in return. Sonically, the cavernous atmosphere and in particular the skittering arhythmic drumming, bring to mind Knoxville, the potent collaboration between Tony Buck (The Necks) and Fennesz - but Aging is working with far darker subject matter. By the climactic, bittersweet tones of sax at the cassette's tail end, Aging have truly asserted themselves as world class masters of atmospheric, jazz-influenced gothicism, second only to the likes of Bohren und der Club of Gore."
- Tristan Bath, The Quietus