I Didn't Mind You Improvising, I Just Wish You'd Done It Better 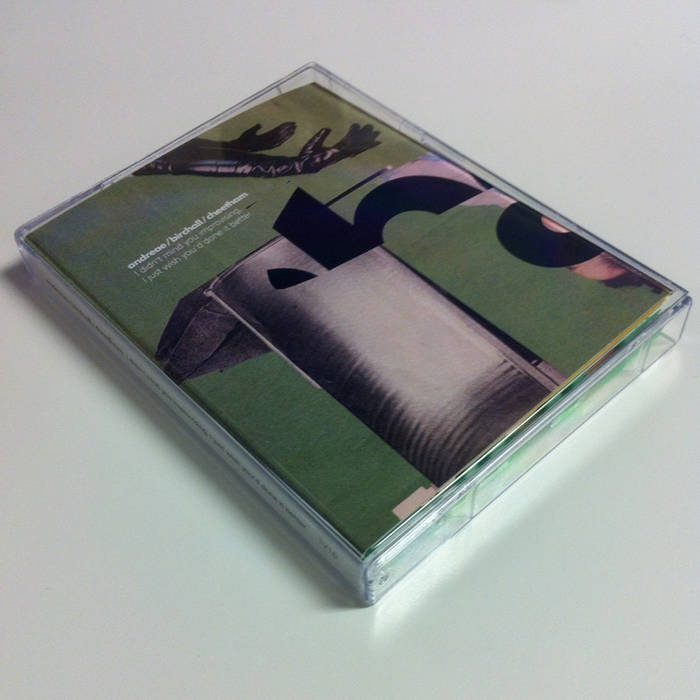 Although the title may be humorous, the first release from the trio of tenor saxophonist Sam Andreae, guitarist David Birchall and drummer Andrew Cheetham is no laughing matter; especially when it displays such a beguiling amount of telepathic interplay. ‘Erich Frohm Where’ sets the tone for the entire cassette, given a synopsis of what to expect on both sides. The simmer begins with Andreae’s burnt saxophones tones that shade and colour in indistinguishable fashion Birchall’s droning feedback squall as Cheetham flitters in chimes and falling rhythm clusters around the ascending momentum. A snap of disquieting silence erupts into a slavering, feral exchange between all three players; snapping, blurting and screaming through the instruments in a cacophony that sounds uncannily in sync. The opener highlights a deep level of mimicry between the trio; all three emboldening this awe-inspiring aspect throughout the two longer improv excursions on the release. ‘Post-Nasal Space’ starts as a barely their examination of stillness, Andreae’s percussive saxophone thumps mirroring Cheetham’s flits of rolled snare. The piece meanders to a slow burning eruption of stunted squawks and stuttered percussion that sounds like bird song strangled and beaten by branches. It’s alarming how much Andreae and Birchall’s saxophone and guitar sound alike, becoming indistinguishable for each other in their cries. ‘It’s a Symmetrical, Asymmetrical Problem’ sees the two exchanging in a similar blurring union, but with far more melodic colours; grunting, moaning and sighing in and out of each other’s phrasings. In these exchanges, Cheetham doesn’t just play referee, but is a pronounced commentator using a dazzling array of percussive tools and anti-rhythmic works-out that call to mind the great Tony Oxley. ‘Dude, you look like Seasick Steve’ is the albums most unified piece. A snarling, skronk-grind rampage that beats the listeners ears with an unrepentant and gleeful fury, you can definitely tell the pummelling is coming from all three sets of fists. This trio does largely deal with textural elements, but their experiments never careen into all-out abstraction. In fact, it is in these moments when the players seem most in sync, mimicking one another in a considered and learned fashion. These can only be the results of a deep level of intuition and hours of jamming the trio have undergone in order to attain their very distinct brand of improv. It’s one that is as at home with bursts of pointillist savagery as it is with sculpted tone poems. And the deeper rewards reaped will only be revealed on repeated listens.

"In many ways, a guitar-sax-drums trio is the most liberated improvising lineup possible. Forty five years on from Derek Bailey, Han Bennink and Evan Parker's seminal freeform blowout The Topography Of The Lungs (which, incidentally, was reissued by Otoroku at the end of last year), it's clear the possibilites of the setup have still barely been breached. This recording of tenor saxophonist Sam Andreae, electric guitarist David M Birchall, and drummer Andrew Cheetham reopens that door once kicked by Topography Of the Lungs (coincidentally, the panning and general sound is almost identical on both records - guitar on the left, drums in the centre, sax on the right, all crystal clear and clean), and across four dynamic improvisations, the trio cross swords, hold hands and generally go nuts in an often brutally feral jam session. Opener 'Eric Frohm Where' builds crunchy guitar drones and sax blasts into a gathering storm which erupts as the stunning Cheetham kicks into action. A calming eye of the storm passes over, before a maddening climax throughout its twelfth minute more akin to some Napalm Death face smasher than any Coltrane shit (including that Live In Japan album). Mimicry is a theme throughout, and when one considers the atonality of Cheetham's percussion, it's no surprise this leads to some pretty weird parps and scrapes from guitar and sax. 'Post Nasal Space' is mostly sparse and skittering, while 'Dude You Look Like Sea Sick Steve' blasts right in our face, as wave upon wave of snare rolls underpin an increasingly similar guitar and sax. The musicianship is typically inventive and stunning, but more uniquely like Topography Of the Lungs, this trio seem to have evolved their own logic, evoking stark imagery through what sounds like total and utter chaos."
- Tristan Bath, The Quietus

What better way to celebrate the coming of spring than dishing up this scuzzy free improv session. This fine tape has grime under its fingernails and is ideal for anyone who thinks those classic-style unadorned free improv records occasionally feel a tad sterile. No danger of this here. I Didn’t Mind You Improvising, I Just Wish You’d Done It Better is a grubby, punk inflected jam whose dank aura occasionally edges toward feeling downright sinister as it glowers and scrapes in the shadows.
The titular threesome of Samuel Andreae, David Birchall and Andrew Cheetham are all superb artists in their own right but here they lock together to deliver a righteous free jazz Armageddon. Birchall’s guitar squats somewhere between an early Sonic Youth style metallic drizzle and an almost McLaughlin-like fuzzy squiggle. He doesn’t quite hit Meeting of the Spirits levels of noodle but his fiery playing certainly whiplashes through these tunes with bracing ferocity. Even on the neo-reductionist clench of Post-Nasal Space, he manages to bring some heat to the deliberately uptight vibe, his scratches and metallic twangs like boiling shards of magma from some distant volcano, raining down on the dusty earth.
Trio sessions are, at their best, slightly unbalanced, the risk of collapse adding an element of frisson. That’s certainly true here with the four tracks of this tape seeming to rock and vibrate like a set of interconnected spinning plates. The two-minute spasm of Dude, You Look Like Sea Sick Steve is particularly splenetic, careering around from pillar to post like an electrocuted squid, Andreae in full-on shredding mode as Birchall’s guitar wails and Cheetham knocks seven shades of … well, you know from his kit.
Drummer Cheetham knows when to blast and when to seethe, and is able to switch between these two modes at will. He’s great when he really lets loose but the quieter moments are cool too, like on the final track, It’s A Symmetrical, Asymmetrical Problem, where he avoids the big beats for skittering, shimmering interventions. Occasionally it sounds dead ritualistic, all slow radiance and gong-like drones, but more often he’s mischievous, shuffling and clattering round like some kind of Norman Wisdom character let loose in the drum booth.
As for Andreae, well, he seems to be engaged in a one-man programme to reinvent the sax from the ground up. He’s all over these four tracks like a rash, buzzing and screeching with an almost revelatory incandescence. On the introductory section of opener Erich Frohm Where he sustains a lengthy, almost hieratic drone, at first coming in underneath Birchall’s feedback then moving front and centre as the guitar shifts and curls into broken shards, phasing and fattening into glorious howl that slowly starts to oscillate and vibrate like some post-Brötzmann foghorn, while all the time Cheetham does his thing in a liquid swirl of percussion. As a way to get things started it ain’t bad, a kind of Coltrane-in-the-junkyard overture, ushering in the coming storm.
I Didn’t Mind You Improvising, I Just Wish You’d Done It Better is a whole bunch of glum fun that’ll whet your appetite for more unhinged voyages from this trio. Stay raw, brothers.
- Paul Magree - We Need No Swords

If you like I Didn't Mind You Improvising, I Just Wish You'd Done It Better, you may also like: