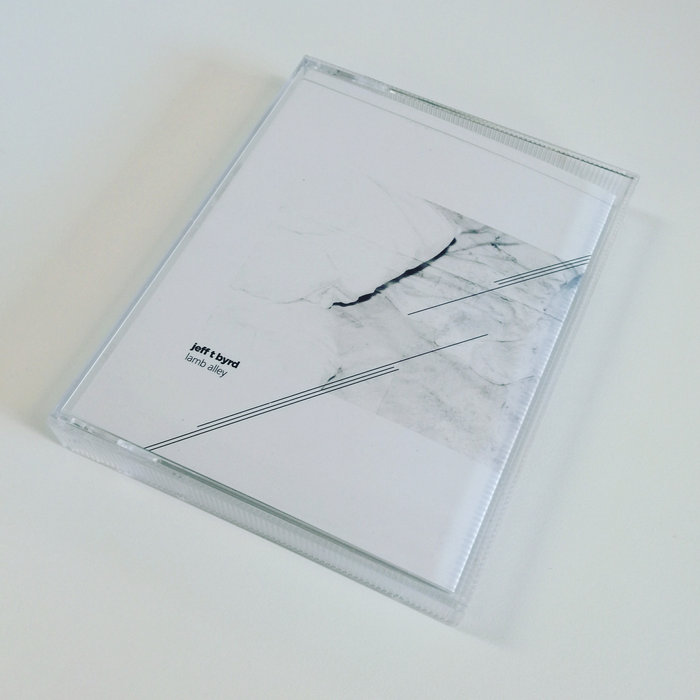 An experienced sound designer and composer working in film, Jeff T Byrd’s first full length album ‘Lamb Alley’ shows an abundance of skill, clarity and nuance befitting his cinematic credentials and a new kind of deeply emotive ambient music. The record acts as a kind of audio autobiography of his space and new environs in Lammgasse, Vienna, where everything from the neighbours’ infant crying, the creak of a piano stool and the thrum of an ending washing machine cycle are repurposed into Byrd’s audio language. There is a forensic level of detail in these recordings, with each track acting like a diary entry chronicling Byrd’s experience of Lammgasse and his inquisitive investigation into the diegetic sounds that hum in his apartment. Whether splicing these audio events into skeletal rhythmic structures or slowly revealing their clarity through modulation, Jeff has been keenly sensitive in intermingling these sonics with sumptuous and liminal melodic themes that ruminate in the ear, flowering throughout the album with the subtle graciousness of an art film score. With so much monosyllabic music being made under the dubious and overpopulated auspices of drone, hauntology and ambient music, ‘Lamb Alley’ assuredly eclipses these restrictive pigeonholes to create a new kind of expressive and narrative audio language that is anything but minimalist. It’s life affirming. A remarkable and inspiring story for the ears.

"Moving into a new place is fun, but can also be a little bit scary. There are new noises to adjust to inside and out: the hum of appliances, the clanking of heaters, the creaking of boards. One wonders if there are creatures in the attic or the walls. Nearby trees moan and shake. Odd birds appear at odd hours. New construction and traffic patterns emerge. Now add neighbors, children and pets. This is what Jeff T. Byrd experienced as he moved to a new apartment in Vienna.

Byrd’s experience in sound design, along with a natural curiosity, inspired him to record the sounds of his new environment and to incorporate them into a series of compositions. Lamb Alley is the end result. The tape traces the aural outlines of his home and attempts to turn unfamiliar into familiar via repetition. As Byrd grows acclimated, his listeners do as well.

While the tracks are billed as ambient, the steady tempos imply more electronic forms. “Entry” seems to explore the sound of a lock being turned, although it may well be a turn signal or windshield wiper. The clicks are matched by piano notes. But not everything fits this profile. “Lift” is downright creepy, as one might expect an old elevator to be, especially if it hasn’t been oiled or acts in a temperamental fashion. Cold Meat Industries would be proud. One feels the artist’s moment of doubt: should I really have moved here? This question continues in “Corridors” and comes to a head in “Cry”; the walls are thin, and that is one loud baby.

But elsewhere, Byrd seems to be having a whole lot of fun. “Spiders” sounds like a group of skeletons finding a player piano, while “Urchin” comes across as a lost Hauschka track. “Wood” is packed with percussive pleasures, and even the warped “Dinnertime” ends in a synthesized wink, like the clopping of horses’ hooves outside an 18th century window. By the end of the tape, Byrd has made friends with his sonic environment; he’s even immortalized it on tape. The spiders have a purpose; the ghosts are no longer mad. Everyone gets to sleep, safe in the company of other noise makers."
- Richard Allen, A Closer Listen

"The first full-length album by American composer Jeff T Byrd takes its name from the street in Vienna on which he recorded the music: Lammgasse or, literally translated, Lamb Alley. Where the music was made is actually a pretty vital detail in this case. Diegetic sounds and incidental noises from around his flat - not to mention the idiosyncratic notes of its ageing upright piano - colour Byrd’s moody productions at every turn. Opener ‘Entry’ poises lush sparse piano keys against an odd cycle of background sounds, finally revealed in the closing moments of the song to be the spin cycle of his washing machine. ‘Lift’ appears to reassemble the dull thuds and yearnings of his building’s elevator into dark atmospherics, chains and pulleys wailing demonically. Perhaps most effective of all are the shrieks of a neighbouring baby, injected into the moody textures of ‘Cry’ to horrifying effect. As Tombed Visions put it, “There is a forensic level of detail in these recordings, with each track acting like a diary entry.”

And it certainly is like a diary - an introverted one full of plenty panic and worry alongside warmer moments and quirky humour. ‘Wood’ and ‘Spiders’ both stick out from the slower textures on the record, the former building a rhythmic race bashed out on wood around the flat, the latter tapping out almost vaudevillian tunes on piano and kitchenware like a gang of octopi. If there’s a Lynchian vibe going on in this apartment, it’s an Eraserhead one, where the banal and domestic be either dream or nightmare depending on what noise you’re focusing in on. Case in point: ‘Urchin’ takes a few pressed out ideas on the piano, snips them up, layers them, and ultimately cooks up an exciting burst of tension - all before quietly disappearing like so many millions of hours of piano players improvising alone in their apartments.

This music’s simply overflowing with ideas, but it sounds like this comes naturally to Byrd’s keen ear for detail. His background in sound design serves him well, shading and toning his sounds infinitesimally. The man fiddles with tempos and timbres, eradicating and accentuating hunks of clarity, decaying piano lines or highlighting piercing squeaks and deep rumbles of room noises.

For all its surface beauty and intrigue though, there’s a deeper story behind Lamb Alley, as the story of a musician from New Orleans uprooting his life and shifting to the Austrian capital, coming to terms with a new alien surrounding of voices heard through ancient walls during long grey winters. (I live in the same city, so very much appreciate how well its mood is captured here.) It’s a magnificent portrait of the experience of relocating oneself, and the dizziness and surprise round every corner. Nervousness and wonder creep in, and you can find yourself in a state where even the creak of a floorboard or echo of a distant door can seem imbued with mystery. Jeff T Byrd’s portrait of his life in Vienna is a surreal one, synthesizing together myriad tropes from ambient music, horror movie film scores, musique concrète, noise, theatre, and even the dreaded ‘neo-classical’ genre in the process. It’s a stunningly well-crafted journey around not only the innards of the flat on Lammgasse, but into the artist’s subconscious."
- Tristan Bath, The Quietus