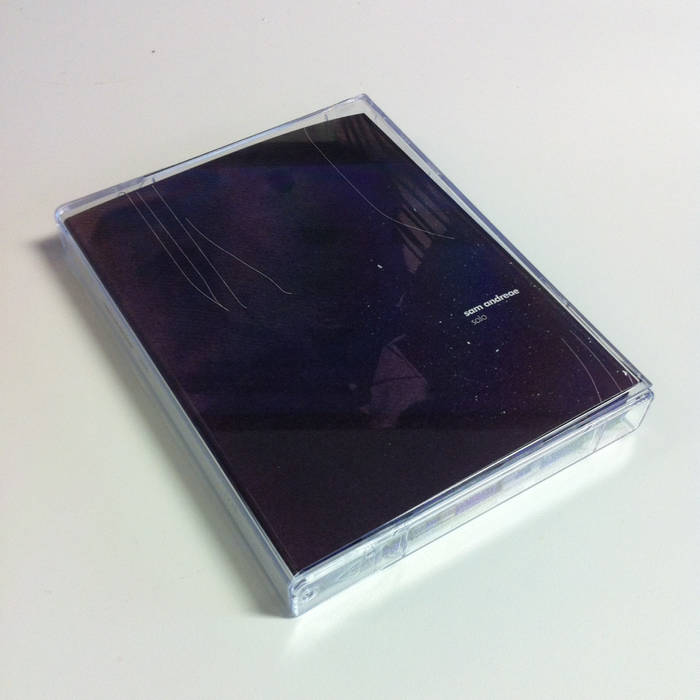 Sam Andreae follows on from his recent trio date for the label with a fiercely experimental collection of recordings for solo tenor saxophone. Each of the 13 pieces that makes up ‘Solo’ focuses on a unique and distinctive set of parameters detailed in the track titles that Andreae had devised to produce a series of consistently brain-jarring results. Using an assortment of different microphone placements, a no input mixer, an assortment of live digital processing software and the expertise of recording engineer Jon Tipler and technician Rodrigo Constanzo, Andreae’s ‘Solo’ is a revolutionary entry in the pantheon of solo saxophone recordings. Sharing more in common with stuttered, glitch compositions of Ryoji Ikeada than seminal solo works by Anthony Braxton or John Butcher, Andreae has decided to focuses on the rhythmic properties and industrial acousmatic sources inherent in the design of the saxophone, rather than any sort of lone melodic exploration. Each spring of the keys and thump of leather pads that adorn the body of the instrument are magnified in a crystal clarity, jerking in and out of tempo as whips of breath offer some uncannily human element in an otherwise mechanised sea of pulsing rhythms. His work especially with feedback is seemingly wildly chaotic, raising more hairs than Kevin Drumm at his deadliest, were it not for the considered timing of blurts and plucks of metal that batter the squalling into some darkened cubist shape. Given how oft alien these soundscapes are, with particular attention given in the mix to experimentations with panning to further disorientate, there is some small assurance in the human tones that naturally emit from Andreae; his mouth salivating and quick inhalations marking this the work of a man, not machine. But it is surely the bravery of this record that marks its distinction. Retreating from any preconceived notions of what a saxophone should do and accomplish, Andreae has forged a startling new sound for the instrument that is analogous to Keith Rowe placing his guitar sideways on a table top all those years ago to begin AMM. ‘Solo’ is an iconoclastic record played by a man who has studied and mastered an entirely new vocabulary for the saxophone and is surely one of the most intense and ferociously original recordings presented thus far by the label, putting the visionary in Tombed Visions.

"Sam Andreae has established himself as a notable young voice in Britain’s vibrant avant-garde jazz scene in recent times, particularly through his work with Andrew Cheetham and David Birchall. Here, however, the Macclesfield-based saxophonist provides the first evidence of his enormous potential as a solo artist. Don’t expect the squalling sax sound of free jazz legend, for ‘Solo’ is an altogether different exploration of the tenor saxophone’s physical capabilities than one might expect, one largely utilising acoustics, breath and feedback. The result is astonishing, and near impossible to analyse thanks to its distinctiveness of voice. ‘Solo’ is essential listening for anyone interested in the wild sonic possibilities at the extreme end of the jazz spectrum."
- Benjamin Bland, Stereoboard

"Sam Andreae, the Macclesfield-based saxophonist presents Solo, presents a 13-track exploiration of the sonic possibilities at the extreme end of the jazz spectrum. Each track focuses on a unique and distinctive set of parameters described by track titles. Compiled using an assortment of different microphone placements, a no input mixer, an assortment of live digital processing software and the expertise of recording engineer Jon Tipler and technician Rodrigo Constanzo Overall, this truly original release highlights just how masterful Andreae's knowledge of the saxophone is."
- Bleep

"am Andreae plots a new course for the saxophone in this album of solo improvisations, says Louder Than War’s Paul Margree.

I first came across saxophonist Sam Andreae as part of an electrifying free-jazz-noise trio with guitarist David Birchall and drummer Andrew Cheetham. The trio’s tape, I Don’t Mind You Improvising, I Just Wish You’d Done It Better, is a noisy, sharp edged cacophony, Andreae’s sax veering from Ayler-style cries and wails to ultra-restrained quacks and toots, joyful and abrasive at the same time (the other two are pretty good as well).

That tape came out on David McLean’s Tombed Visions label. McLean is a saxophonist himself, adding paint-stripping, tumultuous blasts to Gnod’s latest album, Infinity Machines, and McLean, Andreae and the rest are part of a growing, many-tentacled underground scene in Manchester that also takes in Paddy Shine’s Tesla Tapes, the frankly astounding Sacred Tapes imprint and loads more great stuff.

Tombed Visions is also the home for this remarkable album of solo saxophone explorations by Andreae. Here, Andreae steps away from the skronk of the Andreae/Birchall/Cheetham trio, opening up wide realms of abstract scuzz and microscopically detailed examinations of the mechanics of his instrument. In doing so, he activates new possibilities for an instrument in which every possible approach seemed to have been done to death already. After all, there have been more than a few trailblazers. Bechet, Parker (Charlie), Hawkins, Prez, Cannonball, Rollins, Coltrane, Sanders, Brötzmann, Parker (Evan) – after them, where do you go?

Into the matrix, of course. Andreae hooks his sax up to a set of tiny microphones and then runs the results through a no-input mixer and digital processing software in real time, working closely with recording engineer Jon Tipler and technician Rodrigo Constanzo. In each track, the setup is slightly different, enabling Andreae to explore varying degrees of processing and distorting the sounds that he produces.

In terms of technique, he twists away from a John Butcher-style approach of including the resonant, melodic qualities of the saxophone in this type of setup, instead focusing on various extended techniques – the slap tongues, key clicks and air notes beloved of free improvisers the world over – and emphasising the rythmic, almost mechanical sounds produced therein.

If that all sounds a bit rarefied – images of white coated boffins hurrying around to plot things on graphs and scribble down notes about frequencies and harmonic intervals – well, you needn’t worry too much. Andreae’s approach yields up plenty for fans of unhinged experimental music to enjoy, from blasts of high-voltage chaos, through slightly gooey sibilant hisses, to cascades of playful, almost rodent-like scurries and clicks.

The three wholly electric tracks in particular hiss and spit like a cauldron full of snakes poked with a sharp stick. The piece that opens the album – Electric (feedback, mixer, voice) – is a volley of molten noise with that distinctive screwdriver-in-the-light socket screech often found in Toshimaru Nakamura’s early work, or in some of the more recent US noise practitioners (Nick Hoffman and the like).

But Andreae takes it one step further, with a full-spectrum blaze that has an almost rock-like aggression, a Hendrix-style manipulation of the feedback howl into dizzying swoops and distortions. Andreae revisits this sound throughout the album, in particular on the gnarly, pitted caterwauling of the album’s final two tracks. These come on like manic edits of the Jesus and Mary Chain’s Psychocandy, all the tunes scrubbed out leaving only the helter-skelter adrenalin rush of glitching roars.

Elsewhere, there are slightly more refined pleasures. The acoustic tracks – usually close mic’d combinations of mouth, breath and keys – are oddly fun, all wheezing hisses, effervescent pops and the odd atonal hoot. It’s like a troupe of killer owls chasing an outlaw gang of mice around a huge shed – Animal Farm meets The Hunger Games, anyone? One piece sees Andreae playing air notes with a mute but no mouthpiece, resulting in a kind of harsh, scraping parp that reaches new heights of abrasion.

Existing in a curious mid-zone between electro-acoustic noise and reductionist free improvisation, Sam Andreae’s Solo is an endlessly fascinating attempt to get new sonic mileage out of an instrument that you might think was all played out. That he manages to open up pathways to further exploration is testament, both to his own questing impulses and to the singularly idiosyncratic qualities of the saxophone itself."
- Paul Margree, Louder Than War

Infinite thanks to Jon for his patience, enthusiasm and knowledge
and to Rodrigo Constanzo for his continued technical support and
creative inspiration