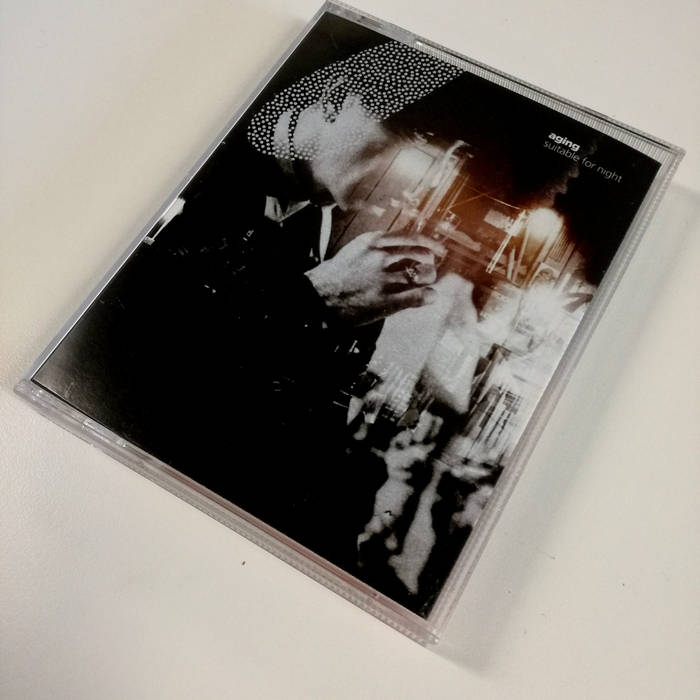 tobias_rieper Dark jazz. Someone was having entirely too much fun in the second song. :-) Sexy and cool!

After a 3 year absence, Tombed Visions founder David McLean finally reemerges with his Aging project, assembling a small jazz quartet to play loose, slow burning improvised torch songs that sounds like they were recorded in a smoke filled dive bar in the wrong part of town, the players becoming more and more inebriated throughout their set. A thick fog of reverb permeates throughout the entirety of the album like a bad hangover. Twin Tenor Saxophones take turns either crooning slowly in unison or snipping at each other across the bar, like an impassioned couple slowly beginning to resent each other as the drinks take their toll on the empty dance floor; a tango of passion and fury. Jon Perry keeps the pulse behind the kit, anchoring the sound with a brush heavy swing that punctures the mist, always finding room to add inventive percussive color. Double Bassist Andy Patterson, along with Perry, really anchor the sound, his playing deep, dark and groove heavy. The album also features the guest vocals of celebrated Manchester poet, Lauren Bolger, who also titled the album. It's here that the group go into their most narcotically insane; free jazz gut shot in a dark alley, crawling its blood soaked carcass across the rain soaked cobbles into a redemptive, evil crescendo. Bolger poetics unfurl across the bruised murder ballad like smoke from a cigarette as Naked (On Drugs) Sebastien Perrin hammers the keys and warbles in the distant when he doesn't have his sax in his mouth. It sounds exactly like murder. And like murder, this record is best practiced in the dark of the night.

"Suitable for Night of Aging is the fourth release in short time of the English Tombed Visions Records. By far the majority of the expenses of that label appear on the cassette, as is the case with this album. Tombed Visions specializes in sound art, ambient, experimental electronics and improvised music. Aging does not seem to fit in the philosophy of the label at first, but falsely shines. The surface is only a thin layer, behind which more than you would expect.

Aging consists of John Perry (drums), Andy Patterson (double bass), Sebastien Perrin (tenor saxophone and piano) and David McLean (tenor saxophone). The latter is the label boss of Tombed Visions. In the album Shepherds of Cats & David McLean , also published in July , he collaborates with the Polish-English company in experimental field, which takes a lot of time.

Aging is a very different cake. The music is a loom of jazz, also called doom jazz. There are some similarities with Bohren & Der Club or Gore, which applies to this reminder of his music, but Aging offers more variety and goes beyond the slightest hut. A clear influence on the music is film noir. Suitable for Night could perfectly serve as a soundtrack for such a movie. However, the music is also suitable for a sultry summer night. But at night there are also things that can not bear the light of day, and that makes Aging awaiting this album.

The album starts sultry, bass and drums play slow and sober, Perry using brushes. Solve the two saxas, one of the tenor saws sounds warm and round and the other hits a sharper tone. The bass sounds dark and deep, which contributes to the nightly atmosphere. The music has the most of the previously mentioned Bohren & Der Club of Gore, although there is more live in the brewery than with the Germans through the introduction of two scissors. The relaxed atmosphere that is called up is shining, something is overlooked, something undecided, which is not clear whether or not to fear. It keeps the tension maintained for the ten minutes that takes the opening trace. Towards the end, this tension is increased by a stroke of bass and a squeaking scissor.

'Suitable for Night' brings you to the place of evil. Away is the lome atmosphere of 'Doused In The Moon'. With piano, drums and saxes, an almost unbearable tension is created. Here's something bad to happen, a murder in a back door in the middle of the night. Lauren Bolger's vocals, which does not sing but darkly and poetically expresses the text, do not bring any illumination. The atmosphere is utterly grim, ominous. Perrin's hammering piano sounds in the foreground, McLean's screaming scissors something in the background and Perry's drums are everywhere. In Bolger's voice, sad resignation sounds while the music is becoming increasingly threatening. The inevitable must be done, salvation is not possible.

In 'The Kiss of Wet Asphalt', the lome atmosphere is picked up again, as if nothing had happened. However, in the previous track something happened that leaves its tracks in music. The scissors brush more together, the bass runs and the pace is slightly higher than in the opener. The musicians seem to want to play the crime scene, avoiding the place of 'Suitable for Night'. Suddenly anxiety arises, the saxplay becomes the opposite, but soon the status quo is recovered.

It will be later and with 'Ballade pour ma Bête Noir' the night will be heard. The pace is slow, the atmosphere is still darker than in the previous piece. Perrin is initially heard on piano, repetitive. Patterson then plays a slow motive on his bass, sometimes overtaking in a free role. The drums sound basic while the two scissors gently circle each other. One of the scissors plays a repetitive theme, while the other scratching takes on the free role. The Perry also gradually gives more freedom. The album ends with low-stretched bass notes.

Suitable for Night is a perfectly built album, with the title track the keytrack. Aging tells a story, but let it be aware that there are gaps that must be filled in by the listener. The plate is heavily laid on the nightly atmosphere, and musically there is a lot to enjoy, from unison playing or soldering scissors to the slow grooving bass, the dragging drums and accented percussion. Beautiful and exciting music for the dark hours."
- Opduvel

"Manchester-dwelling saxophone swinger David McLean has been on a productive tearout this year: Aging’s Suitable For Night (a cassette on his own Tombed Visions label) is something like his sixth album since January 1. As it goes, this is an ideal companion piece – intentionally or otherwise – to his Naked (On Drugs) album, This Gift, which dropped in February, with that record's Barry Adamson-into-Oxbow punky noir offset by this 33 minutes of downer jazz mood pricking. For a while, it’s all brushed drums and caramel luxury, and you need merely sink into it like a valium waterbed; unease grips the closing stages of ‘Doused In The Moon’, either McLean or Sebastien Perrin’s sax reverting to roiling atonality. The title track, which follows, features vocals from poet Lauren Bolger, who flits between eroticised gasps and inscrutable Manc-accented verse. (She also makes fine Sonic Youth-y skronk as Locean.)

A return to calm on ‘The Kiss Of Wet Asphalt’ is belied by Andy Patterson’s itchy, impatient double bass work and ‘Ballade Pour Ma Bête Noire’, while travelling the least distance from its starting point, is another lush piece of lowlit interplay. German band Bohren & Der Club Of Gore are one of the tags on the Bandcamp page, which might be more a case of McLean trying to snag listeners than begging the comparison per se – but it’s not a galaxy off, although Aging are less linear, more changeable. Right now they’d probably do well to try a ‘Lynchian’ tag or similar, too, not that these suave fuckers need my advice on how to comport themselves."
- Noel Gardner, The Quietus

"Another new feature from Tombed Visions, also with David McLean on tenor saxophone. The formation is called Aging, and its composition is complemented by: Andy Patterson - double bass, Jon Perry - drums and Sebastien Perrin - tenor saxophone, piano. This time the music was released on tape and for counterweight (see above) it takes just over 30 minutes. This is probably the third item in the Aging discography.

The album contains three composed and made on a rock , basically without improvisation, new standards (at least they sound like that) and one crazy fragment in a healthy convention of a strongly disheveled free (additionally with a woman's voice). The whole album is like a story about one entertaining night of a group lost in the universe of youth, where it's time to get there (the first), time of explosive play in a suspicious female company (second, title, disheveled) and finally time to wake up (third, Kiss Wet Asphalt) ), and then a difficult way home (fourth).

If the whole album was created in the aesthetics of the title fragment, the reviewer would be extremely happy. Unfortunately, it is an exception. A little pugnacious, somewhat clichéd vaudeville in the The Lounge Lizards type, a version for the less initiated."
- Spontaneous Music Tribune